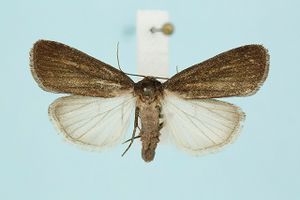 This species is a small moth (wingspan ~ 2½ cm) found in various regions. It is polyphagous and has been rarely recorded as an agricultural pest. However, starting in 2005, it has caused serious damage to maize seedlings in Hebei province, China. Subsequently it has been also reported from other provinces. In 2011 an outbreak of the moth occurred in several Chinese provinces, covering an area of 2 million ha. There are 4 generations per year in China with the 2nd generation causing most of the damage.