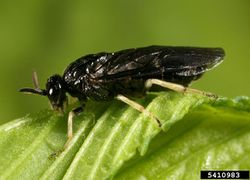 The sawfly is native in Asia and has been reported from Europe since 2003. The larvae can completely defoliate native and non-native elm trees and may cause at least partial dieback.

It was first found in Germany but by 2013 it has spread to most countries in central and eastern Europe, expanding its range by 50-100 km per year. In 2013 its distribution has been still patchy, being present, for example, only in the south-eastern part of Germany.