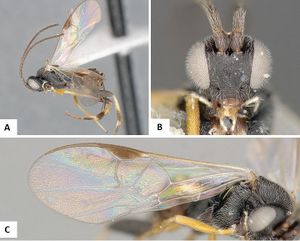 This wasp is widely distributed in southern Europe, Africa and southern parts of Asia. It has been also reported from Australia. It is a solitary endoparasitoid of larvae of several species of Crambidae and Choreutidae, including pest species like the webworms Spoladea recurvalis and Omiodes species (e.g. see Othim et al., 2017). High rates of parasitization have been reported in some pest populations.

For a review, including a redescription, see Fernandez-Triana et al. (2017).