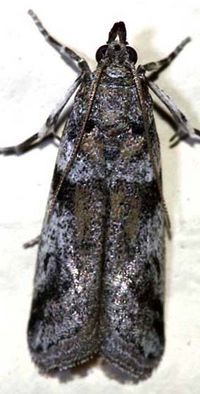 The moth is found in southern North America and has been also reported from South Africa (first record in 2006). In some areas (in particular California), it is a major pest of nut crops, of dried fruits and of stored nuts. Almonds, pistachio and walnuts are the most frequently attacked crops. Infested pistachio nuts split early (e.g. in mid July).

A. transitella overwinters in the larval stage or as pupa and the first adults emerge in spring. In the first generation they breed mainly in fruits left on the ground from the previous year. Under suitable conditions it may also breed throughout the year. The development can be completed in about one month under favorable conditions and there are 3-7, often overlapping generations per year. The adults are good flier and disperse at least 1 km within a day.

Sanitation is strongly recommended in infested orchards, that means removing and destroying nuts fallen to the ground. Insecticides are frequently used. Pheromones can be used for monitoring and also as a control method for mating disruption.

The adult has a length of 2-3 cm with folded wings. It is silvery gray with black wavy transverse bands and markings on the forewings. The larvae are orange after hatching from the eggs and become lighter when they grow.