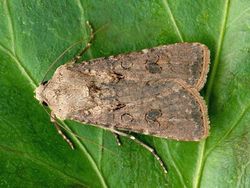 This polyphagous moth is widely distributed in Europe, Asia and Africa and feeds on important crops as well as on wild plants. The crops attacked include, for example, potato, cereals, oildseed rape, cotton or grapevine. The larvae typically hide in the soil and emerge for brief periods to feed on plants. The soil needs to have the right degree of moisture and watering the soil can reduce populations.

In subtropical and tropical regions, the life cycle may be as short as 2 months with up to 4 generations per year. In temperate regions there is often only one generation per year with the larvae overwintering as sixth instars in the soil and pupating in the soil in spring.