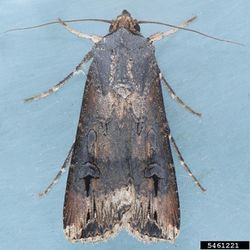 The cutworm is common in many temperate and subtropical regions, where it is often an important pest of field crops (e.g. maize), vegetables and grasses. The larvae feed on leaves near the ground and often cut the stem at ground level. In maize, yield losses of 20% and more have been estimated (Santos and Shields, 1998). Moths often lay their eggs on weeds near maize fields and the larvae then move to the maize plants, cutting off seedlings or tunnelling into the base of older plants and destroying the growing point.

The adult moths often migrate north during the summer and can cause unexpected infestations of crops. Migration distances of 1000 km within a few days have been recorded. The development from egg, through 6 or 7 instars, to mature adult lasts 2 months or less. Pupation takes place in the soil. Depending on the temperature, there may be up to 4 generations per year. Pupae are usually the overwintering stage.

Adults can be monitored by pheromone traps and larvae with bait traps. The larvae feed mainly during the night and hide during the day. Higher populations are often found in no-till crops and in fields which have been flooded. Destruction of weeds can help to reduce the population. Insecticides, applied to the plants or the soil surface, are commonly used for control.

The adult has a wingspan of 40-50 mm. The forewings are brown to grayish with a lighter area in the apical quarter. Females are usually darker than males. In the apical half of the forewing, there is a kidney-shaped mark, followed by 2 elongated marks towards the tip. Additional marks are found in the basal half of the forewing and near the apical margin. The hindwings are light in colour with dark lines along the margin and the veins. The caterpillars are also brownish to grayish.