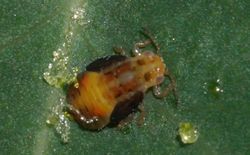 This psyllid is an important pest of pistachio in south-eastern Europe and western Asia. The nymphs and adults feed on the leaves and buds, causing reduced plant growth, defoliation and yield losses. Yield losses of ¼ and more have been reported at high densities (Hassani et al., 2009). Management is mainly achieved by pesticides.

Two seasonal forms of the psyllid have been described. The winter form develops in autumn and is larger and darker than the summer form. After feeding, it migrates to overwintering sites where it hides under loose bark, cracks in the trunk, leaf litter or in the soil. It re-emerges in early spring. The summer form develops later in spring. The development time from egg to adult ranges from around 6 weeks at 20°C to 2 weeks at 30°C.