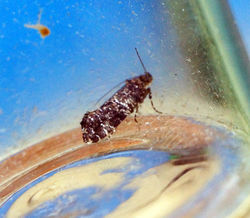 This family of small moths is found mainly in the Palearctic region and contains around 100 species. Several of them are regarded as agricultural pests like the leek moth, Acrolepiopsis assectella, which is native to Europe but has been accidentally introduced into North America. The larvae are leaf miners or bore into stems and buds.

The moths have a wingspan between 7 and 20 mm. They are nocturnal and show a relationship to the family Plutellidae. However, they differ in the wing venation and the structure of the male genitalia.