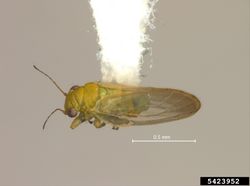 The psyllid is native to eastern Asia and is invasive in Europe (first record from Italy in 2002) and North America (first record from Georgia in 2006, see Ulyshen and Miller, 2007). Since then, it has spread to other parts of Europe and the U.S. The psyllid infests the leaves of ornamental Albizia trees (in Europe A. julibrissin), causing yellowing and deformation of the leaves, premature leaf drop, as well as mould due to excreted honeydew.

The adults are the overwintering stage and around 2 mm long with females being larger than males. The colour varies from greenish in the summer to brownish in the winter. The eyes are red.