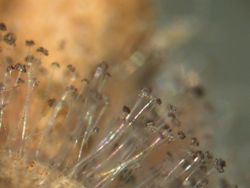 The Zygomycota contain around 1,000 species of mainly saprobic fungi. The group is characterized by their type of sexual reproduction. During this process, two hyphae of different mating types form a bridge or yoke between each other (zygon = yoke). This yoke-like structure becomes the zygosporangium which contains the spherical and sexual zygospores. Both zygosporangium and zygospores are thick-walled resting stages. Asexual spores are also formed. For entomopathogenic species in this group see the Zygomycota (entomopathogens).

The Mucorales is the largest order of Zygomycota with around 300 species. They cause decay on stored fruits, vegetables and other products. Some are also plant pathogens. Rhizopus stolonifer, the common bread mould, is a well known member of this group. The group is characterised by a rapidly growing mycelium which is typically unseptate or irregularly septate.

For a taxonomic review see Hoffmann et al., 2013, for other details see the respective pages in Wikipedia for the Zygomycota and the Mucorales.

The following genera are currently entered under this group: