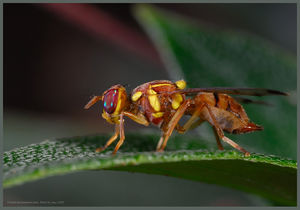 This genus of fruit flies contains almost 200 species which are mainly found in the Oriental and Australasian regions. The economically most important species, Zeugodacus cucurbitae, has been also accidentally introduced into various other regions and is now widely distributed. Many species have cucurbits as host plants.

Until 2015, the genus was taxonomically regarded as a subgenus of the genus Bactrocera. However molecular analyses showed it to be clearly separated from that genus, with a strong relationship to the genus Dacus (Virgilio, 2015). In fact many species had been previously also classified under Dacus.