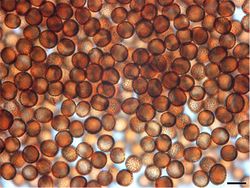 This order of smut fungi contains almost 1,000 species, including various important plant pathogens of cereals. They form thick-walled resting spores in black or brown spore masses called sori which resemble soot or smut. The spores are teliospores and are called ustilospores or smut spores. Some species have been studied as possible biological control agents of weeds. The latter group is covered here.

Note:
Please note that this page only deals with weed pathogens, for other groups of Ustilaginales see:

The following genera are currently entered as weed bioagents under this order: