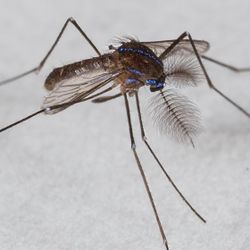 This genus of mosquitoes is widely distributed and includes around 250 species. They bite mainly reptiles and amphibians, but can occasionally bite mammals and humans (e.g. see Toma et al., 2014 and Molaei et al., 2008). Uranotaenia unguiculata has been found to harbour a type of West Nile virus. The breeding sites are predominantly swamps, marshes, stream margins and pools with vegetation.

The species of Uranotaenia are small and delicate mosquitoes (body length typically 2.5-3 mm). The genus is mainly characterised by the structure of the wings. Some species have patches of metallic scales.