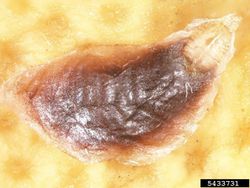 This genus of scale insects is mainly found in warmer regions and contains around 10 species. They live on trees and shrubs. Several species are important plant pests like Unaspis citri on citrus or Unaspis euonymi on ornamentals. The scale cover of females is elongated, pear-shaped and dark brown.