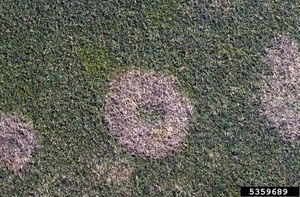 This genus of fungi is widely distributed in temperate regions and often causes rot diseases under snow cover (snow mold diseases). Grasses are frequently affected but the fungi can also infect other cereals and other crops like canola or carrots. The root crown rots leading to blight and plant death. Typhula incarnata and T. ishikariensis are common causes of snow mold of grasses.