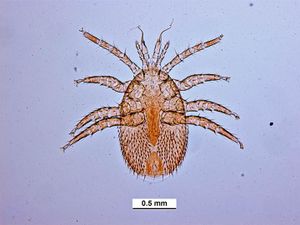 This genus of mites contains several species of bee parasites which are native to southern Asia. There are also some reports from outside the original distribution area, e.g. from Kenya. Like the more destructive Varroa parasites, Tropilaelaps feeds on the hemolymph of honey bee larvae and pupae, causing malformations, death and colony decline.

Tropilaelaps species are natural parasites of Asian honey bees like Apis cerana and Apis florae. However, the European honey bee, Apis mellifera, is also parasitized following its introduction into Asia and infestation levels might reach 30% of the brood.

The mites have a shorter life cycle than Varroa and can outcompete that species. Larval development can be completed within a week. They spread with the adult bees. Compared to Varroa, Tropilaelaps adults are elongated, 0.7 to 1.0 mm long, reddish brown and covered with numerous, short, spine-like hairs.