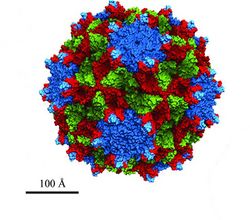 The virus infects the kissing bug Triatoma infestans, an important vector of the Chagas disease in South America. Some related kissing bugs may also become infected. The virus multiplies in the gut cells of the host. Infections cause delayed development, reduced oviposition, and premature death of the host insects. Disease incidence in the field can reach 10%.