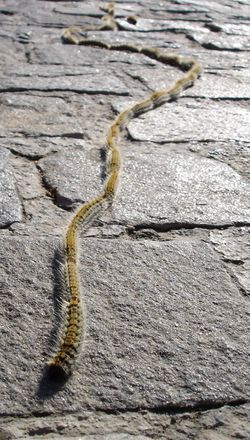 This genus contains around 10 species of processionary moths which are found in temperate and subtropical parts of Europe, Asia and northern Africa. Some are defoliating pests of pine and oak trees. The most important pests are Thaumetopoea pityocampa attacking pine trees and Thaumetopoea processionea feeding on oaks. Apart from the damage caused to the trees, the caterpillars have long stinging hairs in defence to predators which can be a nuisance to humans and domestic animals.

For a phylogenetic study on this genus see Simonato et al., 2015.