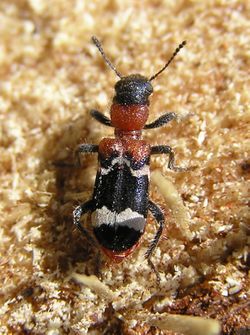 The genus contains predators of bark beetles and has a wide distribution. Several species are important natural enemies. For example in North America Thanasimus dubius is a key predator for Dendroctonus frontalis and also preys on several species of Ips. In Europe Thanasimus formicarius feeds on species of Ips and Tomicus. The beetles might use the aggregation pheromones of the bark beetles for locating their prey. The adults feed on the bark beetle adults and the larvae live in the galleries, preying on the brood.