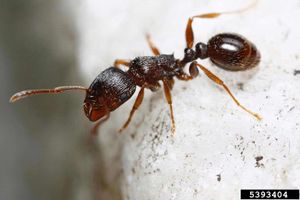 This is a large genus of ants with more than 500 species and a world-wide distribution. Some species are invasive household and urban pests like the pavement ant, Tetramorium caespitum. About half of the species are found in tropical parts of Africa and relatively few in the Americas (Garcia & Fisher, 2011).

While many species are scavengers and predators, some eat seeds and grain. The colonies are often monomorphic and workers are between 2-4 mm long.