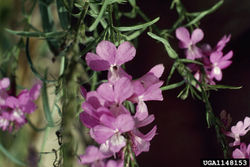 This is a common and important parasitic weed in Africa, attacking maize, sorghum and other cereals. Other crops like sugarcane may also be parasitized. Its seeds germinate after being stimulated by substances released by the roots of host plants. The root of the Striga seedling immediately attaches itself to and penetrates the root of the host plant. The Striga plant then develops using nutrients from its host. Parasitized plants develop yellowish blotches on the leaves, become stunted and wilt. Farmers frequently experience yield losses of more than 50%. An estimated 20 million hectares of crops in Africa are infested by this species.

Although S. hermonthica, like other Striga species, is an obligate parasite, it has green foliage and once established generates additional resources through photosynthesis. However, its roots have a very limited capacity to absorb minerals from the soil. After flowering, the plants produces large quantities of tiny seeds which disperse by wind or water and survive for many years before germination.

For control, a combination of hoeing (before seeds develop), crop rotation (e.g. with legumes), and the use of herbicides is recommended. Nitrogen and phosphate fertilizers also reduce infestations and resistant or tolerant cultivars are available. Legumes like cowpea, groundnut or soybean can also be effective as trap crops which stimulate the suicidal germination of Striga seeds.

The plant grows to a height of 30-100 cm. The lance-shaped leaves are 3-8 cm long. The purple to pink flowers are arranged on spikes, and each spike has about 6-10 open flowers. The fruit is a five-sided capsule, containing about 500 very small seeds, only 0.2-0.3 mm long.