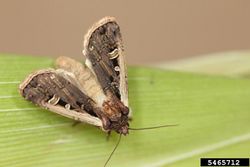 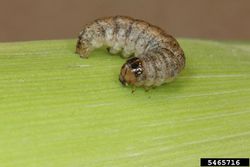 The moth is a pest of beans and maize in North America. It appears to be native in central western states like Colorado, Idaho, and Nebraska, but has recently expanded eastwards up to Pennsylvania (2009) and eastern Canada (including New Brunswick and Nova Scotia by 2017). The young larvae feed on leaves and flower buds, while the older larvae infest bean pods and maize ears. Severe infestations might damage about half of the maize kernels.

Development through the 5 larval stages lasts around 1 month. The mature larva then drops to the ground and overwinters as prepupa in the soil. There is one generation per year. The adult has a wingspan of around 4 cm. The brown forewings have a light stripe along the costal edge with 2 light spots next to this stripe, the more apical spot is crescent-shaped.