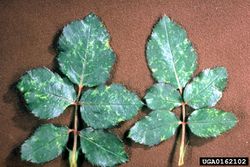 This virus is widely distributed around the world and infects a large variety of plants. Apart from strawberry, crops from other important genera like Rubus, Vitis, Lilium or Rosa become infected. Many hosts remain symptomless, but in some cases chlorotic spots, necrotic rings, yellow vein banding or chlorotic streaks have been described. Severe symptoms have been observed in mixed infections with other plant viruses.

SLRSV can be transmitted through nematodes from the genus Xiphinema. It is of quarantine concern in some countries, which require evidence of absence of this virus in imported planting material. Considerable variation in the DNA sequence of SLRSV have been reported, making detection sometimes difficult.

SLRSV forms icosahedral, non-enveloped particles with a diameter of around 30 nm. The genome consists of two positive-sensed ssRNA molecules with a size of 7.5 kb (RNA1) and 3.8 kb (RNA2). These RNAs are translated into 2 large polyproteins that cleave, forming proteins involved in virus replication (RNA1), as well as movement and coat proteins (RNA2). DNA analysis has suggested that the isolates can be assigned to 2 groups, representing 2 separate species, SLRSV-A and SLRSV-B (Dullemans et al., 2020).