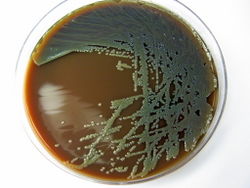 The genus contains around 15 species of Gram-negative bacteria that are found in soil or in plants. They are mostly regarded as beneficial and as promoting plant growth. However, some strains are human or plant pathogens. This page deals with the beneficial species and strains that are antagonistic to plant diseases. For example, some strains of Stenotrophomonas maltophilia suppress infections of bacterial and fungal diseases in potatoes and other crops.

The following antagonistic species of Stenotrophomonas are currently entered in the system: