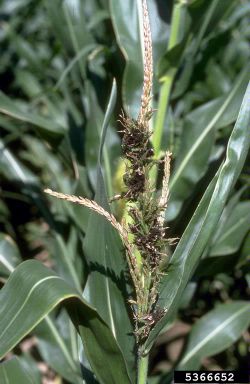 This fungus is wide-spread and causes head smut of maize and sorghum. Two formae speciales infect specifically these 2 crops. S. reilianum presumably originated from Central America, the home of maize, and then spread to other maize producing regions around the world. For example, in Europe it was first reported from France in 1982. In some environments it causes considerable damage like in some areas of northern China which have low temperatures. In those areas the disease incidence can reach 35% and the affected areas one million hectares. Yield losses of up to 300,000 tons annually have been reported from China (Li et al., 2015).

Infections can already start at the seedlings stage and initially cause only mild symptoms of chlorosis. The fungus then lives as an endophyte in leaves and stems. During flowering, symptoms become obvious and are expressed on both the male flowers and the ears of corn and sorghum in the form of smut galls. Infected male flowers develop phyllody and are covered by black spores (head smut). Growth of the ears is suppressed and the remaining kernels are filled with spores.