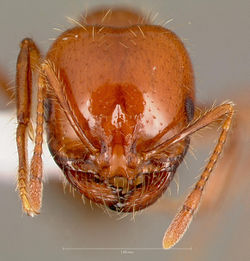 This species is native to southern parts of North America. It can be a pest, although its sting is mild compared to that of the red imported fire ant (Solenopsis invicta). Among others, it can cause damage to electrical equipment and protect mealybugs, collecting honey dew from them. On the other hand it might prey on harmful insects, see Solenopsis xyloni as predator.