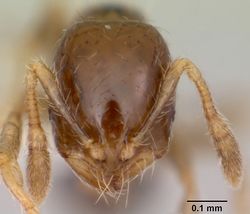 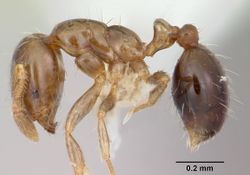 This ant species has been originally described from Papua New Guinea and has been also reported from various Pacific Islands, including Hawaii where it is invasive and a threat to native species. However, the Hawaiian populations appear to belong to a separate species and are in need of a taxonomic re-examination.

Proceedings of the Hawaiian Entomological Society (2016) 48, 95-108
Cassandra S. Ogura-Yamada and Paul D. Krushelnycky (2016)
Testing the attractiveness and efficacy of baits for the monitoring and control of the thief ant, Solenopsis papuana