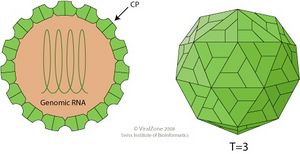 The genus contains viruses resembling the Southern bean mosaic virus. They cause various diseases in crops with symptoms like chlorosis, mosaics and mottling, followed by stunting, necrotic lesions, vein clearing and finally sterility or plant death. The viruses are transmitted by different means like sap, insect vectors (aphids, beetles, etc.) or by seeds.

The particles are isometric, about 30 nm in diameter. The genome consists of single-stranded, positive-sensed RNA with a length of 4100–5700 nucleotides.