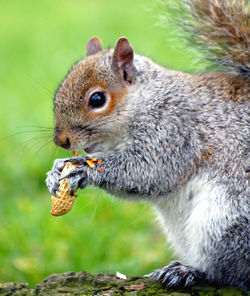 The squirrel is native in North America and invasive in some parts of Europe, South Africa and Australia (from where it has been subsequently eradicated). It was released in the UK in 1889 and has replaced the European red squirrel (Sciurus vulgaris) in many parts of that country. It has also invaded Ireland and Italy (first record in 1948) where populations are expanding.

With a body length of 25-30 cm and a tail of 20-25 cm it is larger than the red squirrel. Apart from its grey colour (the belly is whitish), it also lacks the tufts on the ears. It lives for up to 20 years in captivity and typically has 2 litters of 2-4 each during one year.