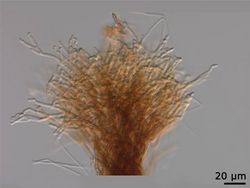 This soilborne fungus is widely distributed, mainly in temperate and subtropical regions, causing white root rot on fruit trees (e.g. apple or avocado), various other crops and forest trees. Infected trees wilt and the roots become covered with white mycelium which later turns greenish or black. Disease development can be rapid, killing an infected tree within weeks. The fungus survives in plant debris for many year and can also persists in the environment on a large number of uncultivated alternative host. Although it produces conidia, chlamydospores and ascospores, they apparently do not play a significant role in the infection process. Control is difficult. Soil solarization, systemic fungicides, removal of infected plant debris and crop rotation have been recommended.

The hyphae of the fungus have characteristic pear-shaped swellings immediately above the septum (see illustration below). It also produces microsclerotia, about 100 µm large. Synnemata are ½-1½ mm long. Conidia are ellipsoid, 3-5 x 2-3 µm large. Chlamydospores are approximately spherical and 15 µm in diameter. Sexual fruiting bodies are brown to black, spherical and about 1-2 mm large. They produce spindle-shaped ascospores, about 35-45 µm long.