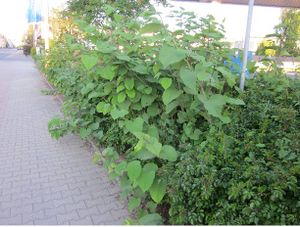 This genus contains around 5 species of small shrubs, including 2 important weeds, Japanese knotweed, Reynoutria japonica and giant knotweed, Reynoutria sachalinensis. Both are of Asian origin and have been introduced into Europe and North America as ornamentals. Of concern as an invasive plant is also the hybrid between both species which has been described first in the Czech Republic in the 1980s and was named Reynoutria × bohemica or Bohemian knotweed.

The genus is closely related to the genera Polygonum and Fallopia and there is often disagreement among authors to what genus a particular species of plant should be assigned. Reynoutria has been previously included under Fallopia but is now considered a separate genus based on morphological and molecular differences.

Currently, the following weedy species have been entered into the system: