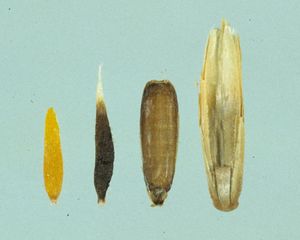 This bacterium causes annual ryegrass toxicity in western and southern Australia. The disease is often fatal to grazing animals. Several million hectares of farmland are affected. Mainly annual ryegrass (Lolium rigidum) becomes infected and corynetoxins are produces by the bacterium, apparently through the association with a bacteriophage. The toxins cause neurological symptoms in livestock like staggering which may result in death of the animals.

The bacterium is transmitted into the inflorescences of the grasses by the nematode Anguina funesta when these colonize and form galls in the developing seeds. Management consists mainly of the use of herbicides to suppress Lolium rigidum.