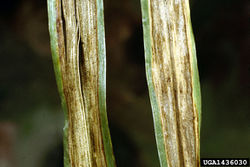 The fungus causes a rust disease of barley with a world-wide distribution, but not equally important in all countries. It can cause serious losses in Central Europe. The disease is characterized by long, clearly defined brown stripes with yellow borders.