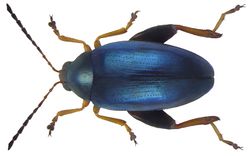 This genus of plant-feeding flea beetles is widely distributed and contains more than 200 species. Several species are considered pests of crops, above all the cabbage stem flea beetle, Psylliodes chrysocephala, which attacks oilseed rape in Europe. Other species feed on plants of families like the Astenaceae, Chenopodiaceae or Solanaceae. The adults are able to jump and they hibernate in leaf litter. The larvae are mainly leaf-miners, stem-borers or rootlet feeders. The pupation takes place in the soil.

The adults are approximately 2-4 mm long and have an elliptical outline. The colour is often metallic. Other characters include 10- or 11-segmented antennae and the structure of the hind tibiae which have their tarsal joint before the apex.