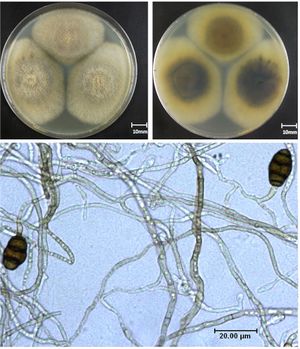 This fungus is widely distributed and is considered to be primarily a saprophytic species. However, it can also cause diseases on a variety of crops like leaf spots, necrotic lesions, chlorosis and other symptoms (e.g. black points on grains). Among others, cereals and grasses are often infected.

The conidia are dark brown, multicellular and egg-shaped to pyriform, approximately 20-35 x 10-20 µm large, and with transverse as well as longitudinal septa. Ascospores are elongated, usually with 3-4 transverse septa.