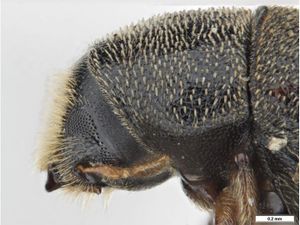 This genus of bark beetles contains around 100 species and is widely distributed in temperate and subtropical regions. The adults have their compound eyes divided and appear to have 4 eyes. They are about 2-3 mm long and mainly attack spruce trees. Several are regarded as pests, like Polygraphus poligraphus and P. rufipennis.