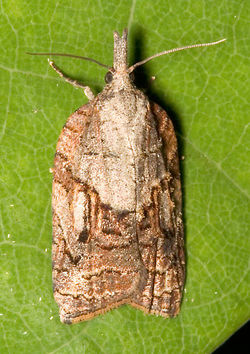 This tortrix moth is an important pest of apple and other fruit trees in eastern North America and has been also recorded from some north-western parts of the continent. Apart from fruit trees, the moth can also breed on a variety of other host trees. The caterpillars construct rolled or folded leaf shelters. They may also feed on the fruit surfaces and cause fruit injuries or premature fruit drop. P. idaeusalis has been mainly controlled by insecticide, but has developed resistance against several compounds.

Pupation takes place in the leaf shelter and there are typically two generations per year. The adult forewings are greyish brown with darker markings and a wingspan of 15-20 mm. P. idaeusalis has been possibly named after the raspberry species Rubus idaeus.