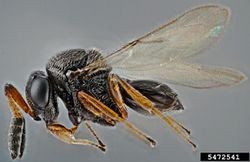 Most species are egg parasitoids of Lepidoptera, Hemiptera and Orthoptera. This includes all genera previously under the Scelionidae, while many platygastrids (Platygastridae in the traditional sense) oviposit either in eggs or early larvae of gall midges (Cecidomyiidae) and complete their development in the larvae. The adults are in general small (0.6 to 10 mm), black and have elbowed antennae.