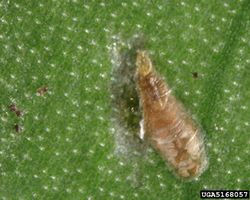 This genus of armoured scale insects is widely distributed and includes around 45 species. Common host plants are fruit trees, but several species are polyphagous, and some are regarded as serious agricultural pests. For example, the fern scale (Pinnaspis aspidistrae) is common on citrus in the Americas. The lesser snow scale (Pinnaspis strachani) is a pest of fruit trees in tropical and subtropical regions.

The scale cover is elongated, around 2 mm long and sometimes pear-shaped. At the tip of the abdomen, females are characterised by a pair of median lobes. These are united at the base by a sclerotized structure and are often situated adjacent to each other.