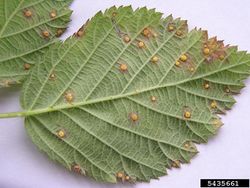 This rust fungus infects both weedy/invasive as well as cultivated species of blackberry like European blackberry (Rubus fruticosus agg.). It was released in Australia in the 1980s and 1990s against invasive blackberries in Australia. For literature covering rust of cultivated blackberry see P. violaceum on crops.