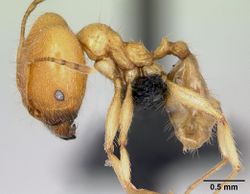 The genus is widespread and very large with around 1,000 species. Several species are considered pests like the invasive big-headed ant.

The colonies usually have several queens and two types (castes) of workers, major workers which have unusually large heads and minor worker with heads comparable to that of other ants. Although the major workers have large mandibles and are also called soldiers, their function seems to be mainly to collect and transport large pieces of food.

The workers are 2-4 mm (minor workers) and 2.5-6 mm (major workers) long. The antennae have 12 segments including a 3-segmented terminal club. The pronotum may have 2 spines and pro- and mesonotum are raised to a hump.