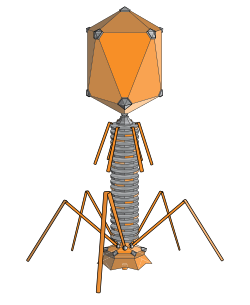 diagram of a T4 bacteriophage (click on image to enlarge it)
Source: Wikimedia Commons

Phages are virus-like organisms infecting bacteria. Some of them have been described as antagonistic to plant pathogenic bacteria. The application of such phages reduced the disease incidence in test plants by more than one half in some cases (Carstens et al., 2018).

The phages are able to penetrate plant tissue and infect the pathogenic bacteria. In addition, some are resistant to a dry environment and may survive in extreme temperatures. Some phages are responsible for high virulence of bacterial phytopathogens as they can be involved in horizontal gene transfer causing exchange of virulence factors. The existence of phage-resistant bacteria and the narrow host range of phages is often seen as limitations which could be overcome by applying a "cocktail" of different phages.

The following antagonistic phages are currently entered in the system: