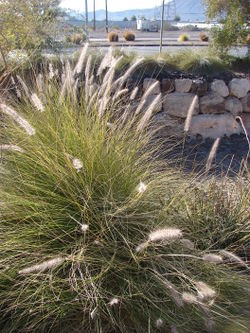 Pennisetum setaceum is native to many parts of Africa and the Near East. The reddish inflorescences with their soft bristles are characteristic. It has been widely introduced into other regions as an ornamental and has become invasive in some areas like South Africa or Hawai'i, where it suppresses native vegetation (e.g. Sweet & Holt, 2015).