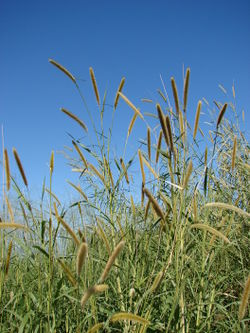 Elephant or napier grass is native to many parts of Africa and is used for forage, as a biofuel, or as a trap crop for stem borer pests (e.g. van den Berg & van Hamburg, 2015). It has been widely introduced into other tropical and subtropical regions and has become invasive in some areas (e.g. see Grey et al., 2015). For example, it has become a serious environmental weed in the Galapagos Islands or an important agricultural weed in sugarcane and other crops in parts of America (e.g. see Oliveira & Freitas, 2008).