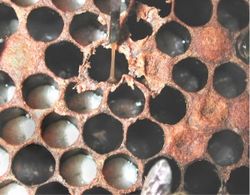 The genus Paenibacillus includes a variety of species of bacteria which are found in different habitats. For example, some are associated with plant roots and are useful beneficial organisms which are antagonistic to plant diseases (see the antagonistic Paenibacillus species). Other species are pathogens of insects. This group includes again beneficial organisms which infect insect pests (see the entomopathogenic Paenibacillus species). Some insect pathogenic species infect honey bees. Economicalls the most important example of the latter group is Paenibacillus larvae which causes the American foulbrood disease.

The genus Paenibacillus contains facultative anaerobic, endospore-forming bacteria. Originally the species have been classified under the genus Bacillus but have been separated on grounds of their genetic structure.

Currently, the following species of Paenibacillus pathogens of beneficial insects have been entered into the system: