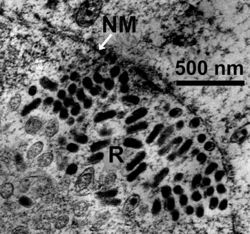 Rods (R) of the Oryctes rhinoceros nudivirus in the nucleus of a fatbody cell of a rhinoceros beetle larva (NM = nuclear membrane).
Author: Alois Huger

This virus is the most important biological control agent of the coconut rhinoceros beetle (Oryctes rhinoceros), a serious pest in tropical parts of Asia and the Pacific. It is either naturally present in the beetle populations or has been deliberately released into various countries. The virus infects adults and larval stages and the adults spread the disease readily within the pest populations. The virus particles are rod-shaped and enveloped, about 220 x 120 nm large. The genome consists of a large dsDNA molecule with about 128 kb and 139 open reading frames (Wang et al., 2011). The virus is the type species of the genus Alphanudivirus. The genus is related to the baculoviruses but is included in a separate family, the Nudiviridae. A review on the biology of this virus has been provided by Huger, 2005.

O. rhinoceros is the main host of the virus, but it can also infect the African rhinoceros beetle, Oryctes monoceros (e.g. see Seguni et al., 1999). Further, the taro beetle Papuana uninodis can be experimentally infected, and there are reports of natural infections in Allomyrina dichotoma, a dynastid found in Korea which is often reared and kept as a pet (e.g. see Lee et al., 2015).

Discovery and biology of the virus

Oryctes rhinoceros is a large horned dynastid beetle (up to 5 cm in length) which is found in southern Asia and some islands of the Pacific and the Indian Ocean. The adult beetles bore into the growing fronds of coconut and oil palms, causing serious damage. They breed mainly in dead palm trunks, where the larvae feed on decaying wood. 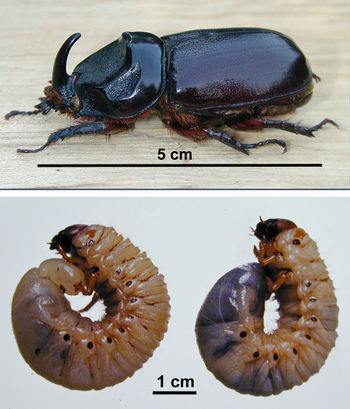 The Oryctes rhinoceros nudivirus was discovered by A.M. Huger in the early 1960s in Malaysia while searching for O. rhinoceros diseases which could be used in biological control programs against this pest (Huger, 1966a, Huger, 1966b and Huger, 1973). He found that larvae and adult beetles become infected through the gut. Infected larvae become transparent, often with a prolapsed rectum, and 3rd instar larvae die after about 3-4 weeks. Adults survive for a similar length of time and can still fly and visit palms and breeding places for 2-3 weeks, spreading the disease.

Both adults and larvae infect each other during feeding or by small quantities of the virus getting accidentally into their mouth. They both excrete virus particles after they have become infected. This is particularly clear in adult beetles where the infected midgut becomes completely filled with virus particles, swells and turns white. The gut symptoms of adults provide a simple way of diagnosing infected adults in the field, even without a dissecting microscope. By continuously excreting virus particles, the infected beetles spread the disease by contaminating breeding places and coconut palms with the virus (see below for more details on the infection process).

Introductions and natural distribution of the virus

The virus disease was initially transferred from Malaysia to Samoa and released there by placing infected larvae in breeding places. It quickly spread around the islands of Samoa, causing a significant decline in the beetle populations and the damage on coconut palms. It was subsequently also released in other Pacific countries where O. rhinoceros occurs, that is Fiji, Tonga, Wallis Island, Tokelau Islands and Papua and New Guinea. In addition, it was later released on the atolls of the Maldives in the Indian Ocean and was even introduced into the Oryctes monoceros populations of Tanzania and the Seychelles. Releasing a few virus infected adult beetles is the simplest method of introducing the disease into a population. Apart from Malaysia, the virus was found to be already naturally present in the Philippines, Indonesia and India.

Different methods of infecting adult beetles and preparing a virus inoculum have been developed (Zelazny et al., 1985 and 1987). However, a limiting factor for releasing additional virus-infected beetles into a beetle population is usually the availability of adults which are difficult to collect from coconut palms.

Sampling the percentage of virus-infected adult beetles after its introduction showed clearly the importance of the virus as a natural control agent. In Samoa, around 35% of the adult beetles collected in the field were infected a few years after the introduction (Zelazny, 1973). In the Maldives, the average infection rate among field collected beetles was 29%, 46% and 41% at different times after the releases, that is after 1-6 months, 6-12 months and 1-2½ years (Zelazny et al., 1990). Four different virus strains/isolates were released in the Maldives and there were indications from field and laboratory observations that these differed in their virulence and in their impacts on the beetle populations (Zelazny et al., 1990 and Zelazny, 1979).

Surveys in the Philippines and Indonesia have given a mixed picture on the natural prevalence of the virus disease in the native range of O. rhinoceros. Adult beetles collected in the Philippines, Borneo (Kalimantan), North Sulawesi and parts of Sumatra had an infection rate of 20-30%, comparable to that observed after the virus introductions in the Pacific and the Maldives. However, a very low infection rate were found in an oil palm plantation in Sumatra. In Java and South Sulawesi the virus was intially thought to be absent but was later found to occur at extremely low levels. These observations were interpreted as being the result of both environmental conditions suppressing the spread of the virus, as well as the presence of natural resistance in O. rhinoceros populations to the disease (see Zelazny, 1977 and Zelazny et al., 1989).

Clearer indications on the presence of resistance in O. rhinoceros to the virus was provided by Marshall et al. (2017) from the island of Guam to where the beetle had spread in the early 2000s (first record 2007). The authors described a new haplotype of the coconut rhinoceros beetle from Guam called CRB-G which is apparently highly resistant to the virus. The haplotype CRB-G was also reported to be present in other newly invaded locations in Hawaii, the Solomon Islands, and Papua New Guinea. The introduction of a virus-resistant haplotype into these islands has caused considerable alarm among Pacific countries, where the coconut palm is often the most important crop. Marshall et al. (2017) reported also the CRB-G form in other parts of south-eastern Asia like Sumatra, the Philippines and Palau, where mixtures of susceptible and resistant haplotypes appear to exist side by side.

While the extremely low incidence of the virus in eastern Java indicated the presence of virus resistance there, releases of virus-infected beetles in Central Java, with a virus strain from Sumatra, still reduced the O. rhinoceros populations. Eleven years after these releases, the beneficial effects were still visible in the palm damage of the treated plots. However, strangely, the damage reduction had not spread to the nearby untreated control plots, 10-20 km away (Munaan et al., 1989).

Therefore, the prevalence of the virus in and its effect on O. rhinoceros populations appear to be the result of a combination of different factors which include: 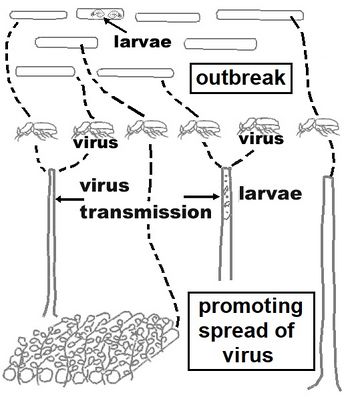 Diagram of the ecology of Oryctes rhinoceros and its virus disease during a replanting situation. Six adult beetles searching for breeding places (dotted lines = flight paths) are shown and 2 of them are infected with the virus disease. Above the beetles are 8 coconut trunks lying on the ground, one of them with larvae. Because of the abundance of possible breeding places there is no contact between the infected and healthy beetles or the larvae and no virus transmission. Below the beetles are a pile of coconut trunks hidden from the beetles by cover crop and 3 dead-standing palms (one with larvae). The dead-standing palms are the preferred breeding sites and there is frequent contact between the beetles and therefore virus transmission. - (Click on image to enlarge it)
.

Ecology of the virus and management options

From surveys in the Philippines and Indonesia it became clear that the ecological conditions are important for the transmission of the virus disease and its impact on the O. rhinoceros population. Coconut palms which had died without being felled (dead-standing palms) were most often used by the beetles for breeding and also had the highest disease incidence. Stumps and logs lying on the ground were less often used and had a much lower disease incidence (see Zelazny & Alfiler, 1989 as well as Zelazny et al., 1992). The dead-standing palms are the original type of breeding site used by O. rhinoceros before plantations existed and coconut trees were felled. They are obviously recognized most readily by the beetles as a suitable breeding place. Logs on the ground are less often found by the beetles, partly because they are often hidden by vegetation.

Transmission of the virus occurs through contact between adult beetles as well as between adults and larvae, in breeding sites as well as in coconut palms. The more often a specific breeding place is visited by adult beetles, the greater the chance of virus transmission. Thus, some dead-standing palms per hectare with few other available breeding places in the vicinity are the ideal conditions for virus transmission, resulting in little damage to coconut palms. On the other hand, when coconut or oil palm plantations are replanted, an environment is created which suppresses transmission of the virus. There are simply too many possible breeding places and not enough contact among adults and between adults and larvae. This is illustrated in the top part of the diagram on the right. The bottom part illustrates how the transmission of the virus can be improved under replanting conditions by hiding the breeding places. Cover crop is grown over the felled trunks and around 5 palms per hectare are left dead standing.

The methods described above for improving the spread of the virus will, however, not be effective if there is a high levels of virus resistance in the area. Under such conditions, outbreaks will be difficult to prevent, even with hiding breeding places and the use of the fungal disease Metarhizium majus. 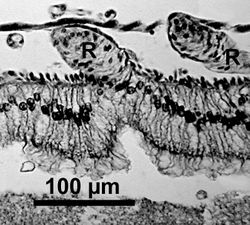 In adult beetles, the virus infects mainly the midgut and only multiplies in the cell nuclei. In contrast to the baculoviruses which are embedded in a crystalline protein matrix, the Oryctes rhinoceros virus does not produce such protein crystals, therefore the name "nudivirus". In rhinoceros beetle larvae various other tissues can become infected by the virus apart from the gut, but again the virus only multiplies in the cell nuclei.

The midgut wall of the adult beetle is composed of a single layer of cells. If gut cells are damaged or die, they are replaced by new cells which are generated in the "regenerative crypts" (see illustration at left). When beetles become infected by the virus this replacement mechanism is accelerated and the dying cells are pushed into the inside of the gut. The gut becomes white, swollen and completely filled with dead cells, mainly composed of nuclei filled with virus particles. Eventually the virus particles are excreted by the infected beetle. For more details see the light - and electron microscopic images below and Huger, 1973.