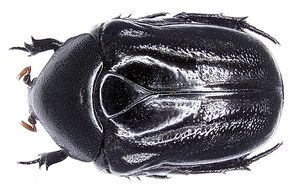 The genus includes around 10 species of tropical African scarabs which are associated with honey bee colonies. Two of them are regarded as import honey bee pests. The beetles breed in dung, but the adults invade honey bee colonies and prey on the brood. In Kenya, up to 700 beetles have been recorded from a single hive (Oldroyd & Allsopp, 2017).