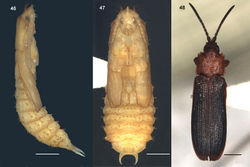 This leaf beetle is found in south-eastern Asia, where it attacks nipa palms (Nypa fruticans) and various other types of palms. During the last decades, it has expanded its distribution range and has invaded southern China. It has been also reported from Cyprus (Vassiliou et al., 2011).

The morphology and biology of O. nipae is similar to the coconut hispid, Brontispa longissima, and several other hispid beetles infesting palm trees in eastern Asia. The adults and larvae are flat and live inside the still folded leaflet of the palms, feeding on the leaf surface. Once the fronds unfold, the leaflets show necrotic streaks and heavy infestations may result in the death of the palm. The elytra of O. nipae are uniformly black, in contrast to B. longissima where the base of the elytra is reddish-brown.