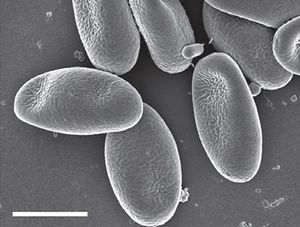 This microsporidium infects honey bees causing energetic stress and immune suppression in the bees. The disease weakens bee colonies and contributes to colony-losses. Workers, drones, and queens can become infected. Additional stress factors like exposure to insecticides promote the disease. Following oral infections, N. ceranae infects the cells of the midgut epithelium. The infected cells produce new spores that are discharged through the gut and infect other bees in the hive.

N. ceranae was originally described from the Asian honeybee, Apis cerana, but can also infect Apis mellifera. Infections on European honey bees were first reported around 2005 in Taiwan and Europe. Subsequent studies found the disease in honeybee samples, already collected during 1996 in the U.S.A. and during 2002 in France. It now has a world-wide distribution.

In many areas the pathogen seems to have largely replaced the related microsporidium Nosema apis which has been known as a widespread bee pathogen from many years. According to some studies, N. ceranae is more virulent. Its spores are slightly smaller and have fewer coils of the polar filament when seen with an electron microscope. PCR analysis provides a reliable identification of both species. Disease incidence seems to vary according to country and has been reported to range from < 10% to 90% of the colonies sampled.

N. ceranae seems to affect mainly honey bees already weakened by other causes, e.g. bees stressed by exposure to pesticides. Infected bees are less active and show increased defecation. An increased number of dead bees can be seen near the hive, and colonies have a reduced honey production. As a gut pathogen, it quickly spreads within a honey bee colony through the excreta. Equally, the pathogen can easily spread to neighbouring hives by bees or bee keepers. The spores are durable and have been detected also in honey samples, a possible means of long distance dispersal of the disease.

For management, it is recommended to maintain healthy colonies through standard bee keeping practices. The antibiotic fumagillin has been used in some countries, but can contaminate honey.

For reviews on Nosema ceranae see: