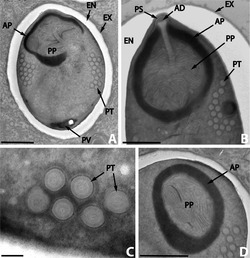 EM images of a microsporidian of the genus Nosema (not an entomopathogenic species) - A = cross section of mature spore, B-D = details of spore (click on image to enlarge it)
Authors: Bhen Sikina Toguebaye, Yann Quilichini, Papa Mbagnick Diagne and Bernard Marchand
Source:Wikimedia Commons

The genus contains more than 30 recognized species causing mainly diseases in insects. The genus still includes many other species whose DNA structure has not yet been analyzed and which might be transferred to other genera. Each sporont produces only one spore. The spores are approximately 3 x 5 µm in size, with 2 nuclei and the polar tube has 9-12 coils. The species are usually specific to one host species.

Several species of Nosema are considered useful biological control agents and some have been used in pest control programs.